More information
About solutions for bags under the eyes

The solution for bags under the eyes and sagging eyelids are blepharo-plasty. This procedure is a very recent invention that will brighten and rejuvenate your face in a relatively simple manner.

BAGS UNDER THE EYES AND SAGGING EYELIDS: THE CAUSES

The main cause of bags under the eyes and sagging eyelids are the natural ageing process. Sooner or later, everyone is confronted with this phenomenon. Smoking, drinking and the sun can accelerate this process.

Aging is accompanied by the reduction of the elastic connective tissue cells. Through this, the skin looses its tautness and suppleness; the upper eyelids start to sag. In addition, the connective tissue that keeps the fatty tissue in place becomes weaker. Because of this the fat starts to protrude with the well known bags under the eyes as a result.

BAGS UNDER THE EYES AND SAGGING EYELIDS: THE PROCEDURE

For the lower eyelids, the so-called “bags under the eyes” is the greatest problem. The most current treatment methods for bags under the eyes are the removal of the fatty tissue and the hamra technique. In consultation with the plastic surgeon, you will decide which treatment will offer you the best result.

In the first option, it is mainly the fatty tissue that is removed. First and in particular, it will be determined if the bags under the eyes are honestly the result of an excess of fatty tissue or if it is a result of fluid accumulation. Fatty tissue is always constant and can easily be removed, in contrast to an edema, in which the amount may vary from hour to hour.

When the cause of the bags under the eyes is indeed a surplus of fatty tissue, the removal occurs via an incision just under the lashes. Often some skin is removed in order to avoid the effect of an “empty pocket”. For this type of treatment of bags under the eyes, one may also easily tighten the orbicular muscle.

Bags under the eyes: before and after pics 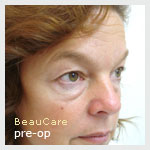 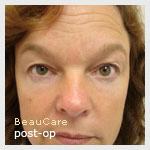