In addition to the treatment of sticking-out ears, ear lobe correction is also part of the aesthetic otoplastic surgery. Ear lobes can look different than what is desired. They can be too big or have a special shape. An ear lobe can also tear because of an earring accident.

A few months after the ear lobe correction, the scar of the surgery is strong enough to be pierced again.

A pressure dressing will be put to reduce bleeding. The area is to be kept dry.

Ear lobe correction: before and after pics 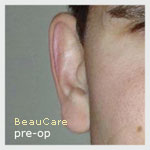 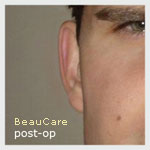