Excess skin on the underside of the upper arms and on the inside of the upper legs is often the result of a pregnancy, an extreme weight loss or aging. An arm lift, also known as brachioplasty, and respectively a thigh lift can be the solution for a loss of skin elasticity or excess skin.

The arm lift is a standard surgical procedure mainly performed for aesthetic reasons. This surgery takes two hours and is done under general anaesthesia. An arm lift procedure involves excess skin removal, mostly on the inside of the upper arm, making the skin tighter again. An arm lift is often combined with a liposculpture, a procedure where subcutaneous fatty tissue is taken away.

You can leave the clinic the same day of the surgery.

Bruises and swelling can appear until 20 days afteer the surgery. The healing can give some discomfort due to the skin tension around the scar borders.

To make the scar as least noticeable as possible, excess skin is removed on the inside of the upper arm. So the scar usually goes from the armpit to the elbow and it can be reddish and knobby during the first three months. A year after the arm lift the scars will fade and become smoother. Till then, the scar needs to be protected against the sun.

The necessity to stop working will depend on the type of professional activity. The result will be appreciated within 6 to 12 months after surgery.

Pictures before and after an armlift 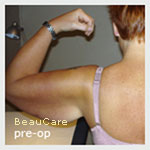 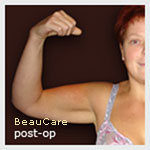 Here you can find pictures of armlift