More information
About an abdominoplasty

An abdominoplasty could be considered if the abdominal wall has changed, that is when the skin’s elasticity has decreased, the muscles have stretched and the belly starts to hang.

An abdominoplasty is always performed under general anaesthesia. A mini belly lift takes about 1,5 hours to 2 hours, a full tummy tuck will take approximately two hours and a half to three hours.

You can return home the day of your operation. The final result may be judged 4 to 6 months after the surgery. Please follow well these instructions :

Following an abdominoplasty, the surgeon will place two drains in order to clear excess blood and wound liquids.These drains might be removed between two and four days after the surgery. When drains are removed you can take off the special bandage for a quick shower.

You will be invited for a follow-up appointment after 14 days. At this moment stitches will be removed.

Depending on the complexity of the procedure, you can get back to work two to four weeks after the abdominoplasty.

« Inconveniences to be expected after your surgery »

The scars from the abdominoplasty may be reddish and lumpy. By using a moisturizing cream, the scars will fade more quickly. The skin of the tummy may also become insensitive for the first months, since a big part of the skin has been detached during surgery. This is a strange sensation, but this inconvenience will disappear a few months after the surgery.

IN CASE OF OVERWEIGHT

In case you have overweight, we advise you to wait until you have reached a stable weight. Moreover, in case of overweight, there is a higher risk of complications.

Abdominoplasty: before and after pics 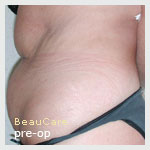 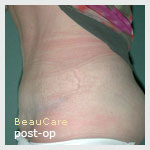 Here you can find pictures of abdominoplasty

Read more links about a mini or full abdominoplasty