More information
About a chin correction or neck lift

A neck correction or neck lift serves for the treatment of wrinkled and sagging skin at the level of the chin and neck.

A major cause for double chin is body fat, but this is not the only cause. Hereditary factors often play a role of getting a double chin. Age is also one of the main causes of double chin as this causes your skin to loosen and your muscles to weaken.

A neck lift is often combined with a macs-facelift, an eye lid correction and/or a liposculpture (fat removal).

With a neck correction or a neck lift an incision is made in front of and behind the ear and around the earlobe. The plastic surgeon loosens the skin and pulls it tight. This is the moment when the accumulated fat is sucked out.

The plastic surgeon sometimes has to make a small incision under the chin when performing a neck lift. This way the underlying muscles are corrected for an extra nice result.

A neck lift is performed under full or local anaesthetic and the procedure lasts approximately two hours.

You can go leave the clinic on the same day of your operation. After the neck lift surgery, a loose bandage is immediately applied. That bandage may be removed one day after the neck lift unless instructed otherwise.

The first days after your neck lift, there may be some bruises and swelling, but those will disappear spontaneously. One week after a neck lift, the stitches are removed. The scars will be red and thick at first, but over time they will fade until they are hardly visible.

The result of a neck lift or neck correction is usually visible after three months and is, in principle, lasting.

Chin lift: before and after pics 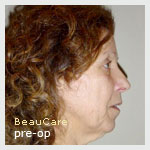 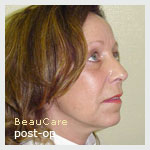