More information
About the otoplasty

Flap-ears or sticking-out ears are usually the consequence of a congenital defect of the cartilaginous skeleton of the auricle. Sticking-out ears can be the cause of three abnormalities:

– When the central fold in the ear, also called the antihelix, is underdeveloped the auricle itself sticks out. The solution for this problem is remodelling the cartilage.
– The edge of the ear can also be too short. Little, so-called bowl-shaped ears are the most difficult kind to correct.
– When the body of the auricle is overdeveloped it results in fully sticking-out ears. This type of flap-ears is often coupled with the two abnormalities mentioned above.

OTOPLASTY: THE TREATMENT OF STICKING-OUT EARS

As above-mentioned typology already surmised, sticking-out ears can be very different from one person to another. Otoplasty, or the treatment of sticking-out ears, is therefore a very individual procedure.

Otoplasty is the correction of the form of the cartilaginous skeleton by making an incision at the back of the auricle. The surgeon corrects the cartilage, remodels it and sometimes even removes a tiny piece. This way, he reduces the angle of the ear in relation to the head. Afterwards, the small incision is carefully closed and a special bandage is applied so that the ear will hold its proper position.

Otoplasty takes about an hour, under local anaesthesia.

otoplasty: before and after pics 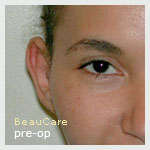 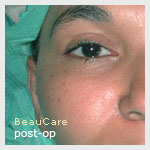 Here you can find before and after pictures of an otoplasty

Read more links about an otoplasty at Clinic BeauCare