The size and shape of the implant for the buttock enlargement will be chosen in consultation with the plastic surgeon. Before the procedure, the surgeon will determine where the incision will be made and where the buttock prosthesis is best placed.

We always use implants filled with firm silicone gel. These prostheses feel very natural and cannot leak in the event of tearing. Buttock implants are firmer than female breast implants and softer than male pectoral prostheses.

Buttock implants: photos before and after 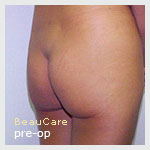 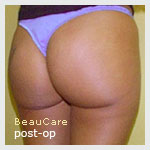 Here you can find pictures of buttock implants