More information
About a buttock lift

Young buttocks are firm, but in the course of years they can start to sag because of gravity and diminishing elasticity of the skin.

Sagging buttocks is generally an aesthetic problem of the white race. The result is a “square” backside due to sagging in the lower section and the lack of firmness in the upper section of the buttocks. This is in principle equal to the problem of sagging breasts. Pregnancies and loss of weight can also have an influence to the form of the buttocks. In this way excess skin develops in the buttocks and the adjoining bones.

When the size of the buttocks is sufficient but there is excess skin prevalent, a buttock lift can be performed. This will result in a scar in the buttock fold.

The buttock lift is performed under full anaesthetics and takes approximately 2 hours.

A buttock lift is often combined with a liposculpture of surrounding regions and/or a buttocks enlargement.

After a buttock lift you are able to go home the very same day. The buttocks will be swollen and bleeding may occur. During the first weeks after the buttock lift it is recommended to wear supportive underpants (elasto-bandage).

Buttock lift: before and after pics 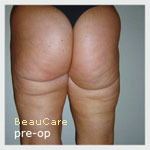 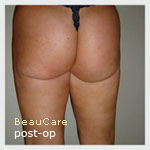 Here you can find pictures of buttock lift