More information
About a blepharoplasty

The eyelid correction or blepharoplasty is different from person to person and depends on the amount of fatty tissue and skin to be removed. Corrections of the upper and lower eyelid should also be seen as two different procedures.

A correction of the upper eyelid especially involves skin removal. This type of blepharoplasty takes an average of one hour and is usually done under local anaesthesia.
The incision is made in the fold of the eyelid, so the scar will not be visible. A strip of skin (and sometimes also a piece of the orbicular muscle of the eye) is cut out. Possible fatty tissue at the interior corner of the eye, next to the nose, will also be removed.

When treating the lower eyelids, the so-called bags under the eyes are the biggest problem. Other methods need to be used: removal of fatty tissue and Hamra’s technique. Together with the plastic surgeon you can decide which method would provide the best result for you.

The first possibility involves removing fatty tissue. First of all, the surgeon needs to determine whether the bags under the eyes are indeed caused by excess fatty tissue and not fluid accumulation. Seeing that fatty tissue is constant, it can easily be removed. An oedema, on the other hand, is not constant and can alter from hour to hour.

If an excess of fatty tissue causes the bags under the eyes, removal will be done by making an incision just below the eyelashes. Often some skin is removed as well in order to avoid the effect of a ‘puffy, empty bag’ under the eyes. With this type of blepharoplasty, the orbicular muscle around the eye can easily be tightened.This form of blepharoplasty takes about an hour and is usually done under local anaesthesia.

Wim Danau preformed the most brillant surgery. His work is so fine, I am returning next week for breast surgery as I would'nt wish to go to anyone else ...

Yes its a pain to travel but 2 hours is nothing compared to the saving & i believe his work is better than most I have seen from top surgeons praised in this country !

Only downside is the stitch removal best is to ask your GP or a local nurse, I'm so pleased !!

Belpharoplasty: before and after pics 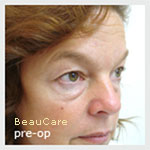 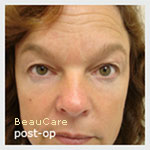 Here you can find pictures of eye lifting intervention