More information
About a nipple surgery

Approximately 2% of the female population has at least one inverted nipple. In most cases women are born that way. This could be solved easily with a nipple correction under local anaesthetic.

The second one is the “badly outlayed” inverted nipple. This type of inverted nipple is manifested from puberty and is more difficult to correct. A scar has to be formed through the nipple to loosen the milk ducks. It is after-all these milk ducks that cause the inversion of the nipple.

This operation may cause a discharge for a few weeks. After correcting this type of inverted nipple, breast feeding may no longer be possible.

Both nipple corrections are done under local anaesthetic. You may go home straight after the procedure.

Inverted Nipple: before and after pics 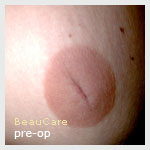 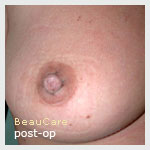 Here you can find pictures of inverted nipple